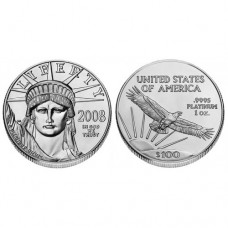 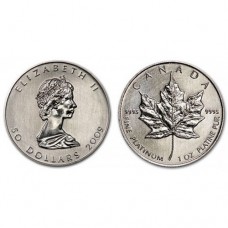 The obverse features a bust of Queen Elizabeth II, whose design changed in 1990 to feature a mature portrait of the Queen. In both versions, her name (ELIZABETH II) appears at top and the denomination of the coin and the date of issue rest underneath the bust.

The reverse depicts a Maple Leaf, the national symbol of Canada and for which the coin derives its name. The reverse also lists the name of the country and the amount and purity of the gold. Based on the popularity of the Gold Canadian Maple Leaf, the Royal Canadian Mint began producing 99.9% pure platinum bullion coins. The Ottawa branch of the Mint has been in operation since 1908, when it was opened as a branch of Britain’s Royal Mint. It came under Canadian ownership in 1931 and became a corporation of the Crown in 1969. The Government of Canada guarantees the purity, weight, and legal tender value of each Canadian Maple Leaf bullion coin. 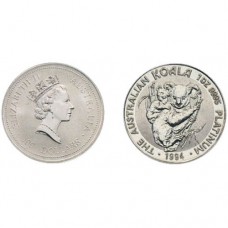 Platinum Australian Koala coins have the Ian Rank Broadley portrait of Queen Elizabeth II. Ian Rank-Broadley is one of the foremost sculptors working today. His effigy of H.M. Queen Elizabeth II appears on all UK and Commonwealth coinage since 1998. She is encircled by her name, the name of the country, and the denomination.. The Koala, found in coastal regions of eastern and southern Australia, is depicted on the reverse side of the platinum coin has been changed almost annually as these platinum coins have been popular with not only platinum investors but coin collectors.

The first Australian platinum bullion coin was produced by the Perth Mint in 1988. During this period the platinum metal was not as expensive as it is in the present market. Today, the platinum one ounce coins are traded as a commodity and have been known to consistently be higher than platinum rates due to it’s rarity. The Platinum Australian Koala have 99.95% as they are produced as a globally recognized  investment in the precious metal market. The Platinum Australian Koala, Platinum American Eagle and Platinum Canadian Maple Leaf  have made it possible for the collectors and investors to make investment in smaller purchases and at an affordable rate.

Platinum coins and bullion have seen a tremendous increase in platinum price as it is the rarest of the four precious metals. Platinum is not only a necessity for some items to be manufactured like automobiles, but also recognized by both countries and individuals as a means to physically diversify their financial holdings. Since it is a precious metal like gold and silver the mint has created the coins in one ounce equivalent that commonly use by individuals who buy gold coins or silver bullion coins. Most platinum coin collectors do not wish to sell or trade the coins once they take possession which also increases the value of the Platinum Australian Koala.